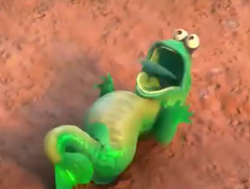 Ice Age
Martians were a primitive species of tiny amphibious aliens with green skin and bulging eyes. They evolved in the Pleistocene, but became extinct soon afterwards.

While the Earth was undergoing a glacial period, Mars, in contrast, was a temperate world, similar to present-day Earth. Unfortunately, all life on Mars was annihilated and the planet became a desert after a devastating impact by a rogue flying saucer, piloted by a Sabertoothed Squirrel.