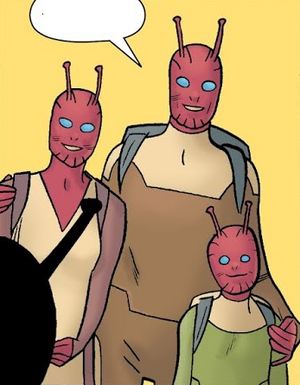 During the 1990s, a ship from the third planet of the Solar System had crashed Mars. The human pilots on the vessel were killed during the crash, however the leaders of the Red Tribes of Mars being paranoid wished to launch a war fleet. However Mark Markz, son of a diplomat that brought peace to Mars managed to convince them that they should send a scout to observe the world. The leaders of the planet felt Mark Markz was weak like his father, who ironically brought peace to Mars using words, who they viewed as a coward due to his pacifistic ways. However they agreed to send a scout given that he was their representative. In truth it was a form of exile, as the Chancellor wanted to be rid of the Martian seeing him as an embarrassment and also hearing rumors of Mark Markz homosexuality.

Despite this Mark Markz would become the hero Barbalien and respected by the people of Spiral City. He took the identity of a police officer and became a respected member of the force. However when his partner found out his homosexuality he was shunned by his former colleagues. Seeing life no better here than on Mars, Barbalien decided to abandon the planet and return home, only to be whisked away by Starlok to fight against Anti-God.

In 3016 AD the Martians launched an unprovoked invasion of Earth. The Quantum League managed to stop the alien invaders, however it costed the near complete of the League. Earth and humanity was traumatized by the alien attack to the point it transformed their culture from a utopia-society to a military regime known as the Citadel led by former Leager Gravity Lad. The Citadel launched a twenty-five year campaign of xenocide against all aliens wiping their species and culture.

The Martians were among the first to suffer at the hands of humanity. Some managed to escape to other worlds, disguising themselves as humans, though they were hunted by the Science Police. One of the surviving Martians took the mantle of Barbali-Teen and joined the reformed Quantum League in opposition of the injustice of Gravitus.

The Martians are red coarse skinned humanoids with small antennas and indigo eyes. They are creatures possessing great strength, capable using shape-shifting to alter their appearance or their weight, giving them the ability to fly.

The Martians were noted to be a war-like culture heavily focusing on battle training. Before their unification as a species they saw those that shunned battle and favored peace to be weak. Also homosexuality was considered to be deviant behavior.

By the 31st century after their near genocide by a vengeful humanity the Martians have become more peaceful and open minded.

Retrieved from "https://aliens.fandom.com/wiki/Martian_(Black_Hammer)?oldid=181808"
Community content is available under CC-BY-SA unless otherwise noted.