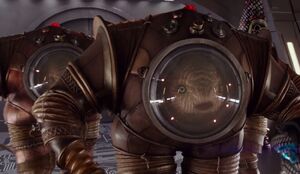 Luc Besson
The Martapurai are a sapient spacefaring race which made first contact with Earth at some point after the KCO2. They appear to be very broad fish-like humanoids enclosed in environmental suits, and have slimy hands with tentacular fingers

Retrieved from "https://aliens.fandom.com/wiki/Martapurai?oldid=161523"
Community content is available under CC-BY-SA unless otherwise noted.