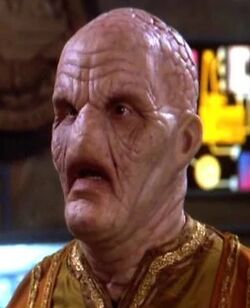 Babylon 5
Markabs were a sapient, spacefaring humanoid species which was decimated by a plague in the year 2259.

Markabs are humanoids with hairless skin. Their scalps are covered in scales. Their blood is red, and their internal anatomy is similar to Humans in many aspects, including lungs, lymph nodes, a heart, and a nervous system that works by transmitting electrical impulses from neuron to neuron using chemical synapses. However, synaptic molecules in this species are produced by specialized yellow cells: a peculiarity almost unique to the Markabs. The only other sapient species known to share this trait is the Pak'ma'ra, which have green cells analogous to the Markabs' yellow cells.

The Markab population in the year 2259 was estimated at over two billion in their homeworld, with an additional two to three millions in colonies and outposts.