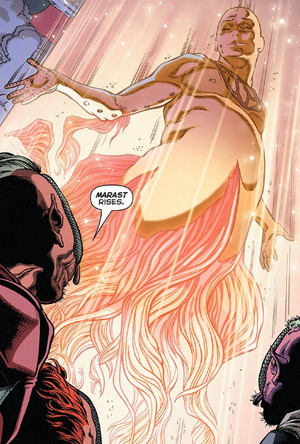 Marast was an entity of unknown origin that lived on a planet in Space Sector 0169.

For an indefinite time, Marast was worshipped as a deity to a race of insect-like humanoids. In exchange for the sun to rise, Marast demanded two children to be sacrificed to him so that he may have strength to raise the sun.

During the ritual, Marast was murdered by the First of the Free, leader of the Godkillers. As the Godkiller beheaded him, a sun was seen rising in the distance. Whether Marast was an impersonator or a actual god is left to be determined.

Retrieved from "https://aliens.fandom.com/wiki/Marast?oldid=164676"
Community content is available under CC-BY-SA unless otherwise noted.