Alien Species
Register
Don't have an account?
Sign In
Advertisement
in: Quadrupedal Species, Descendants of Man, Sapient Species,
and 5 more 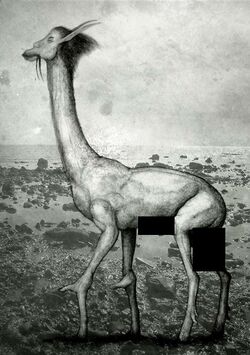 Devolved into non sapient grazers and most Likely extinct

Nemo Ramjet
The Mantelopes were one of the several posthuman species created by the Qu from a colony of the Star People.

The ancestors of the Mantelopes were created as singers and memory retainers for the Qu, but when the Qu left, they went nearly extinct. The survivors evolved a quadrupedal stance and became grazing herd animals.

Even after this rapid evolution, they still managed to retain their human minds, who were now trapped in bodies that were unable to build and change the world around them. For centuries, the herds sang melancholic songs about their inability to do anything with their intelligence while, since a big brain brings no advantage if it can not be used, their brains devolved and over the next thousand years, they became simple, non-sapient grazers.