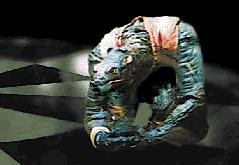 Star Wars
Mantellian Savrips are large sapient organisms indigenous to Ord Mantell. They are notable for their hunched statures, leathery reptiloid skin, serpentine heads, and arms long enough to drag against the ground. Naturally, they are inclined towards combat, and it was this combined with their native language - Savrip - and their primitive technologies which led most sapients to initially regard them as nothing more than a very cunning non-sapient species. Because of this ill-conceived notion, they were hunted or exported until few of their kind remained on their homeworld by the time of the Galactic Empire.

Some sapients are known to enjoy the taste of Mantellian Savrip meat, and Baroness Omnino, along with her son and the Jedi impostor Taxer Sundown planned to breed them for food on Ord Mantell until they were stopped around 37 BBY by the Jedi Knight Qui-Gon Jinn. Many Savrips also fell to the plots of one man - the aforementioned Sundown - who used the existing prejudice which immigrant Mantellians held against the native Savrips in order to blame murders that he and his organization conducted in order to shift the blame from himself as he secretly rose through the ranks of land baron.

Some Savrips could learn to speak Basic, albeit with an accent.