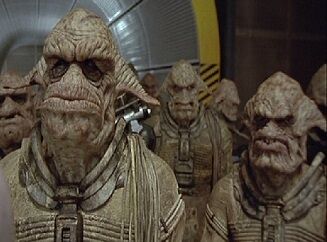 The Fifth Element
Mangalores are an aggressive species.

Their height and build are very similar to that of Humans, although they appear slightly stockier. They appear to posses the ability to shapeshift or at least alter their appearance, as several are shown to take on human guises and then "shake" them off appearing as they normally do, though this might be a technological ability.

Typically they have very deep gravely voices, making very animalistic growls and noises when angered. Though whether these traits are exclusive to males is not known as no females are encountered.

They are a scattered warrior race, selling them selves as mercenaries. Either through fearlessness or stupidity they will take on near suicidal missions for the right price (be that new hi tech weapons or money), showing little regard for their own safety to the extent that upon failure of a mission any remaining Mangalores will detonate a highly explosive device in an attempt to wipe out as many enemies as possible, for the sake of honour.

In terms of leadership not much organisation is witnessed, other than succession appears to depend on whoever the current leader appoints, however if the leader is killed without the appointment of a second, mangalores won't fight or will stop fighting if in the middle of combat without a leader.

They also appear to take some pleasure in destruction and killing, (although this may be due to the individuals rather than the species) as when attacking a defenceless Mondoshawan ship they are seen enjoying its demise when pulling the trigger on the fighters joystick.