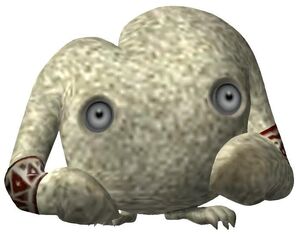 The Great Protector (God of all Pikmin)

The Mamuta, also known as "The Great Protector", is a peculiar and ancient species discovered on PNF-404. Due to its special abilities, it is known as the "God of all Pikmin".

The Mamuta is a bipedal creature with an asymmetrical structure to its body: a shoulder prominently larger than the other. It has two forward-facing eyes spread wide apart, and stubby feet ending in three-tied claws. Its long arms end in fingerless hands, and these arms also have special markings on them.

The Mamuta are considered mysterious creatures, but don't seem to show as much aggression towards other animals as some would think. They're often observed standing completely still, like statues, and aren't at all bothered by small flying creatures (such as the Spectralids) landing and resting on top of them.

Studies shown that they actually are smart enough to sow and grow plant species, possibly including Pikmin, as they do eat seeds and fruits they cultivate. They also have a special fondness for flowers, mostly for their appearance.

The Mamuta has a rather unique, yet mysterious fertility ability in its hands when it comes to plants. This is most notable when it uses them on a juvenile plant lifeform. It slams its heavy hands onto the plant and, through an unknown process, makes the plants mature within instances. This is most evident in Pikmin - leaf pikmin being slammed into the ground turn into mature flower Pikmin seconds after the "attack".

Retrieved from "https://aliens.fandom.com/wiki/Mamuta?oldid=169564"
Community content is available under CC-BY-SA unless otherwise noted.