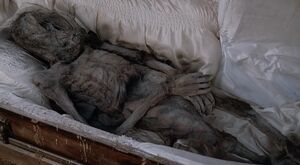 An unidentified non-Human mammalian corpse was found inside the grave of Human abductee Ray Soames in Bellefleur, Oregon, 1992.

Initially, Fox Mulder seemed to believe that the mammalian creature was an alien, but he and his partner Dana Scully later came to the conclusion that the creature was probably Soames himself, degenerated after death due to a mutation resulted from experiments which had been performed on him during or after his abduction.

The autopsy conducted by Scully reveals that the mammalian corpse is 1.56 meter long, weights 52 pounds (~ 23.6 kg), and is in advanced stages of decay and desiccation. Its cranium is oblate and has large ocular cavities. Scully was certain that it was mammalian, but not Human, and suggested that it might have been a chimpanzee or an orangutan, placed inside Soames' coffin as "somebody's sick joke". However, her analysis of the corpses' x-rays suggested that it could have been mutated.

Further investigations couldn't be conducted, as the body was stolen, and the pictures and x-rays were destroyed in a fire, along with other evidences related to the investigation of the deaths of Soames' colleagues, who were all collectively abducted while celebrating their recent graduation in 1989. One of them, Billy Miles, reported that a metallic device was implanted in his nasal cavity, and a similar implant was found in the mammalian corpse, potentially confirming both Miles' story and the corpse's identity as Ray Soames. Analysis of the implant failed to identify the material that it was made of.

Retrieved from "https://aliens.fandom.com/wiki/Mammalian_corpse?oldid=181204"
Community content is available under CC-BY-SA unless otherwise noted.