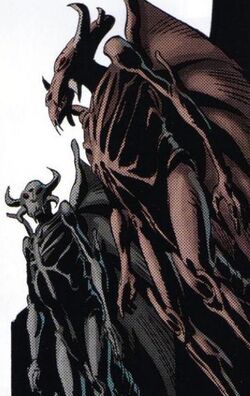 Doctor Who
The Malevilus are a sapient species of psychic winged humanoids. Described by the Doctor as the "most terrible of alien races", they have posed themselves as gods to the Roman Empire on Earth and created an alternate timeline in which the Empire never fell, but turned into a hostile interstellar nation.

Members of this species have a distinctly demonic appearance with elongated heads, horns, sharp teeth and almond-shaped eyes. Their ribcage is protected by what appears to be an exoskeleton, and they also have bat-like wings and long tails. The Malevilus are carnivores, and brutally slaughter their victims in a sadistic frenzy when they eat.

Members of this species are gifted with extraordinary psychic abilities. They can read minds, assume the form of other creatures, and particularly powerful individuals are even capable of being in more than one place at once. They can also psychically destroy others by provoking spontaneous internal combustion or torture others with their minds.

Retrieved from "https://aliens.fandom.com/wiki/Malevilus?oldid=180186"
Community content is available under CC-BY-SA unless otherwise noted.