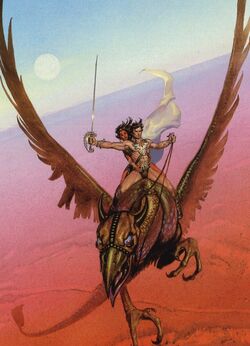 The Malagor is a very large bird native to the planet Barsoom. It is thought to be extinct by the general population. Ras Thavas was able to produce over 500 of these birds for the Hormad in the city of Morbus; he seemingly used the same or a simliar process used to create the hormad. The birds do not see well at night, and are startled by the sight of Thuria in the sky. When the hormad Pew Mogel left Morbus he took some of these birds with him, and they became part of his plan to conquer Barsoom.

Retrieved from "https://aliens.fandom.com/wiki/Malagor?oldid=124457"
Community content is available under CC-BY-SA unless otherwise noted.