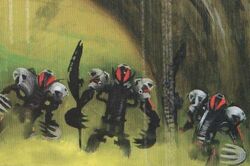 The Makuta are a species of pure energy called Antidermis encased in armor. They originate from a sentient pool on an island in the Southern Islands. They have a Brotherhood that provides leadership. All but two members of the species have died.

They were techno-organic until they evolved into Antidermis. Now they are Antidermis contained in armor.

Retrieved from "https://aliens.fandom.com/wiki/Makuta?oldid=196231"
Community content is available under CC-BY-SA unless otherwise noted.