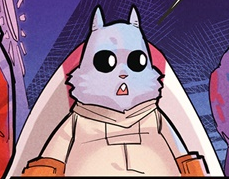 Meteora Universe
The Mahokus are an alien race from the Meteora Comic Series.

The Mahokus are famous for their lack of clear genetic code. They are essentially shapeshifters, capable of changing their appearance temporarily, if a sample of someone else's genes is added to their own.

Retrieved from "https://aliens.fandom.com/wiki/Mahokus?oldid=182458"
Community content is available under CC-BY-SA unless otherwise noted.