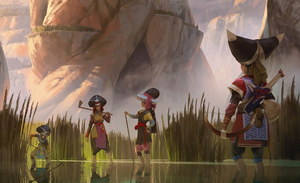 Endless Universe
The Magtay are a culture native to the terraces of Auriga.

The Magtay appear to be humanoid, they resemble Asian-istic people, with long elaborate hairstyles wrapped in headdresses.

The Magtay are known as a civilization of hard-working farmers. Their lands are closely identified with their intricate layers of terraces that climb the hills and mountains near their villages.

The Magtay are said to be fiercely protective of their culture and their ways. Qualities such as hard-working and independent, the Magtay see little need to bow to another empire and change ancient traditions. Many other tribes and peoples have tried to dominate them, and none have succeeded.

Their elite warriors, known as the Zujajun are drawn from the hardy farmers of their tribe, and use bows whose arrows are tipped with venom.

Retrieved from "https://aliens.fandom.com/wiki/Magtay?oldid=161810"
Community content is available under CC-BY-SA unless otherwise noted.