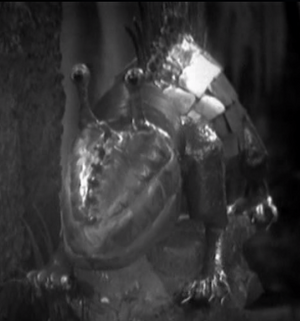 Magnedons are a species of metallic-based lifeforms found on the Daleks homeworld of Skaro. Reptilianoid in appearance, they have the shape of a dog-sized lizard with eyestalks and a row of tall spikes along the snout and back. Their bodies are covered in metallic plates.

In the thousand years war between the Daleks and Thals, entire environments on Skaro were turned into petrified forests, with perfectly fossilized Magnedons preserved within them. The Doctor encountered one of these on his first visit to the planet. He theorized that in life the creature may have used internal magnetic fields to hold its body together and to attract prey of equally metallic nature. Petrified Magnedons are still used by the Thal population on the planet to recharge their hand lights

Appearances: Doctor Who – "The Dead Planet" (first episode of "The Daleks" arc)

Retrieved from "https://aliens.fandom.com/wiki/Magnedon?oldid=131275"
Community content is available under CC-BY-SA unless otherwise noted.