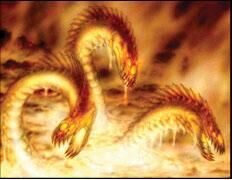 Magmoor are large, predatory, serpentine organisms that inhabit magma pools deep within the Magmoor Caverns on Tallon IV, which are subsequently named after the creatures. Obviously, they are thermophiles, which is the only reason they can survive in magma pools as they do. Magmoors are ambush predators, waiting beneath the magma for potential prey to come unwittingly too close. At this point, they quickly rise out of their hiding places to breathe a gout of flame.

While intimidating in appearance, they are not tremendously durable creatures, and their skulls are in fact relatively fragile in comparison to many other species. Charged beam weapons as well as missiles will cause them to flinch in pain, while ice-based weaponry can actually freeze their head and brains, forcing them to go temporarily comatose.