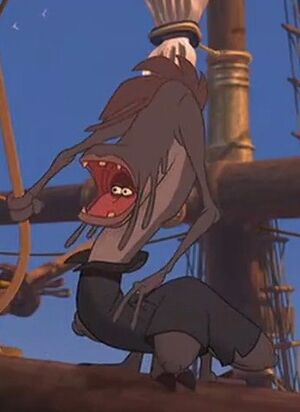 The Macriki are a sapient alien species and part of a vast interstellar empire which also includes multiple other races.

Macriki are elongated creatures with six limbs, consisting of two pairs of short legs with clawed feet, and a pair of long thin arms with tridactyl hands. They also have a fish-like dorsal fin.

Their most notable trait, however, is that their two eyes are located inside their mouths, and therefore not visible when the mouth is closed.

Longbourne was one of John Silver's gang of interstellar pirates recruited to serve aboard the spaceship RLS Legacy in her expedition to find the legendary treasure of Captain Flint.

When Silver led the mutiny following the Legacy's arrival on Treasure Planet, Longbourne along with Hands and Fayvoon, pursued Dr. Doppler, Captain Amelia and Jim Hawkins as they attempted to escape in one of the lifeboats. Thanks to Doppler's unexpectedly accurate targeting, the three pirates ended up falling out of the ship's longboat room from a great height to their apparent deaths.

Retrieved from "https://aliens.fandom.com/wiki/Macriki?oldid=187862"
Community content is available under CC-BY-SA unless otherwise noted.