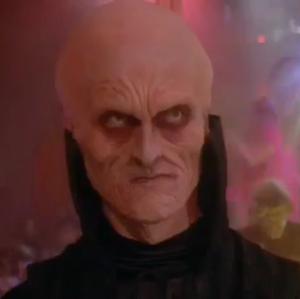 Space Precinct
The Macke were a species native to the Tarn homeworld.

The Macke were energy creatures that resembled bald humanoids. According to Tarn folklore they were lost souls, condemned to live out their lives in the bodies of others. Macke require hosts in order to exist. They hibernate in hosts without their knowledge. The hosts serves as an anchor into the physical realm and thus is the only one it can't kill. They can manifest themselves to be seen by others though vanish as if they were ghosts and could not be .

The Macke need life force to sustain it, which it does by attacking other sentients draining them of life force. Macke go into hibernation every hundred years and when its supply runs out, it awakens to feed, to kill. When a host dies, it doesn't guarantee that the Macke dies, too. They can only survive without a host for a few seconds. So if it senses that its host is dying, it immediately finds a new one.

The macke hosts were all hunted and wiped out, their corpses sent into the suns. However one Macke, Enil Kmada, managed to escape to Epsilon Eridani, and for two hundred years prayed on prostitutes. Kmada soon became an urban myth and vanished from memory. However when he killed an undercover police officer the Demeter City precinct took notice. Further investigation revealed that the female officer's partner was the host. After he died the macke passed to Lt. Brogan. Kmada would have killed Brogan's wife if the officer realized his harbored an alien entity. Rushing back to the precinct, Brogan electrocuted himself with the help of a robot. Having nowhere to flee, Kmada fled into the robot who then deleted the new data eliminating the entity.

Retrieved from "https://aliens.fandom.com/wiki/Macke?oldid=157670"
Community content is available under CC-BY-SA unless otherwise noted.