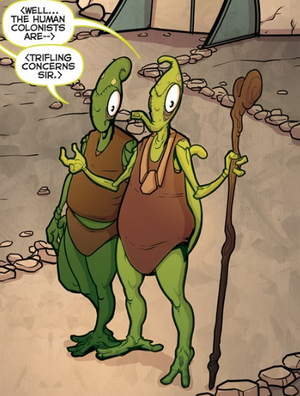 The Maasym are an alien species native to the planet Crux-4.

The Maasym are bipedal, green skinned aliens with small stout but stubby tails. They possess long drooping snouts and two oval eyes that dominates the sides of their heads. The top of their heads are curved stubs.

Humanity after irreversibly damaging their planet, leading to worldwide anarchy and economic collapse, turned their eyes towards the stars for a new home. Destiny Inc., a small group of idealistic colonists located a world known as Crux-4, which humanity could begin again. However this world was already inhabited by an intelligent species known as the Maasym. Unfettered the human leaders managed to convince the Prime Minister of Crux-4 to allow humans to settle their world, believing the two species could co-exist and create a new beginning.

Though the Maasym leader welcomed the humans to their world, many younger Maasym felt that their lands were being encroached. They feared humanity, and believe that the concessions they gave was the first step to annihilation of their species.

When a Maasym rider seemingly killed the leader of the colony, during a meeting between the Maasym leader, one of the Sheriff's deputies threaten the planetary sovereign with his gun as a warning for their leader's death. Tensions between the colonists and the rightful owners of the planet rose and began to lead to war. Prime Minister Okul was ousted by his own pupil, Zosma for supporting peace with the humans. However evidence was discovered that the human sheriff conspired with the Maasym dissidents to attack the mayor in order to act as a cause to create a wall between the two species. However his death was an unintended event as the sheriff only wanted to scare him. However it was found out that the Maasym were tricked by another party to kill the human mayor. It was this group's desire to wipe out the Maasym and human colonists so that the human corporate groups could harvest the planet's vegetation without interference.

During the climax where the battle devolved into a three way battle, Prime Minister Okul however appeared and managed to calm all sides down with his words of peace and brotherhood. Unfortunately one human bigot refused to accept his terms and attempted to assassinate him but was saved by the Sheriff. Afterwards both sides reconciled understanding that they were all victims of deceit. Though now that the herbs were destroyed the humans left the planet.

The Maasym's planet is orbited by two suns, one blue and the other yellow. According to a local legend when the yellow sun sets, leaving only the blue sun's light visible, Blue Hour occurs. Blue Hour is believed to be a time when evil creeps into the minds of the weak and foul plans are hatched.

The Maasym have one taboo, spilling blood at the Shadow Tree. The Shadow Tree is a sacred tree where any violence of any kind is prohibited.

Retrieved from "https://aliens.fandom.com/wiki/Maasym?oldid=173009"
Community content is available under CC-BY-SA unless otherwise noted.