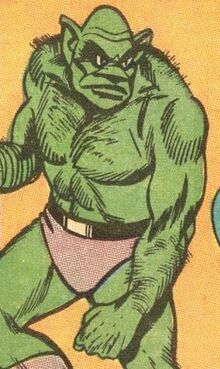 DC Universe
The M'mannix or Mountain M'mannixis a wild and deadly creature native to Mars. There is virtually nothing known about the creature but comments by J'onn J'onnz indicate that the beast is not sapient despite its humanoid appearance.

A group of seven martian invaders once attempted to invade earth while using the form of the M'mannix, they were successfully stopped by the Martian Manhunter and his sidekick Zook.

Retrieved from "https://aliens.fandom.com/wiki/M%27mannix?oldid=173006"
Community content is available under CC-BY-SA unless otherwise noted.