M'galekgolo, more commonly known to Humans as the "Covenant Hunters", serve as large offensive weapons against the Covenant's many enemies. They serve in pairs, and should one fall the surviving one will go berserk. What seem to be their bodies are composed of many worm-like creatures called Lekgolo.

Origins Of the Hunters Edit

The M'galekgolo were brought into the Covenent in the 23rd century through the event known as the "Taming of the Hunters". Their homeplanet, Te, is a gaseous planet with an atmosphere composing of mostly methane and phosphorus. The planet wasn't always gaseous: the gas only produced by the Lekgolo colonies eating through Forerunner artifacts - this was seen as a great heresy by the Covenent which caused them to try and destroy all Lekegolo. The Lekgolo, however, won most ground battles and destroyed massive armies of Covenant and even managed to kill the Arbiter that had been called to the battlefield. However, the Covenent still managed to get the upper hand of the war. The Lekgolo might have been strong on the ground, but they had no defense against the glassing procedures the Covenant eventually used. The Lekgolo, to save themselves from extinction, allowed themselves to be absorbed into the Covenant. Their armour and weapons were provided to them by the Sangheili. Because of this event (and many others), the Lekgolo - and by extension, the M'galekgolo - have a massive respect for the Covenant's Elites.

The M'galekgolo has a blue armor that protects the Lekgolo worms he is composed from, a type of Fuel Rod Gun permanently attached to the right arm and an unbreakable shield attached to the left arm that can be used to deflect or absorb enemy shots. On field, a single M'galekgolo's strategy is simple: shots at the opponent/s, defends and/or charges at the opponent/s (Note: A M'galekgolo can only shoot effectively a stationary target because its gun reloads slowly. However, it does have a powerful blast radius). If in a group, their strategy is more complex: If one of the group member is defeated, the rest will go berserk. It is not wise to get close to a Hunter, as they are immensely physically strong, swiftly killing a player with a melee attack on any difficulty. 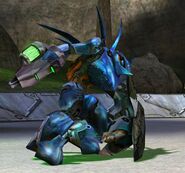 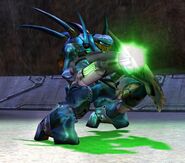 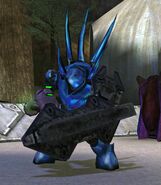 Add a photo to this gallery
Retrieved from "https://aliens.fandom.com/wiki/M%27galekgolo?oldid=120100"
Community content is available under CC-BY-SA unless otherwise noted.