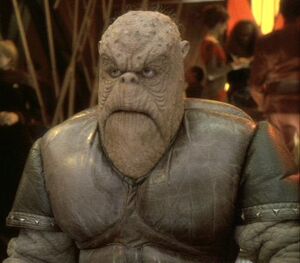 The Lurians are a sapient humanoid species that hail from planet Luria, located within or near the Ionite Nebula. They are rarely seen far away from their homeworld.

Externally, Lurians have a typically mammalianoid appearance. Their bodies are strongly-built and the head is fairly elongated, quite like a Gorilla's. They have tough, crumpled skin, a wide mouth, a puggish nose, two eyes set in relatively deep eye-sockets and a pair of tiny ears placed fairly high on the head. The nose is located between the eyes and they also show evident eye bags. They do possess hair, although some individuals become bald over the time, as happens with Humans.

Lurians have two stomachs and multiple hearts, which makes them stronger and more resistant to both physical damage and toxins than most other species. At least some of them are known to drink enormous quantities of alcoholic beverages with no apparent problems. They are also able to store substances in their extra stomach for several years.

It is still unclear whether Lurians are hermaphrodites or have two sexes. Odo has once implied that Morn belongs to an androgynous species when he was making an announcement starting with "Ladies and gentlemen" and soon added "and all androgynous species" when Morn arrived. However, references to Morn's mother and seventeen brothers and sisters seem to prove that at least their familial structure and terminology is similar to that of dioecious species.

Lurians are rarely found far away from the Ionite Nebula, one notable exception being Morn, who owns a shipping business and appears to reside on the space station Deep Space 9. He is one of Quark's best friends and customers, and seems to spend most of his time in Quark's Bar, becoming somewhat of a mascot figure in the establishment. Very little is known about the Lurian race except that they are ruled by the Royal Family of Luria and that they believe in the concept of afterlife, leaving gifts of food and beverages for the deceased.

Retrieved from "https://aliens.fandom.com/wiki/Lurian?oldid=171724"
Community content is available under CC-BY-SA unless otherwise noted.