Alien Species
Register
Don't have an account?
Sign In
Advertisement
in: A Honeymoon in Space Universe, Non-Sapient Species, Luna Wildlife,
and 9 more 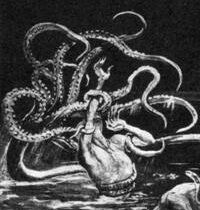 The predator captures a helpless Lunarian

A Honeymoon in Space

George Griffith
This unnamed predator inhabits the few frigid water bodies which still exist in the subterranean realm underneath Newton, the deepest crater of the moon.

Its body is described as resembling a boa constrictor with the head of an octopus. It's light-grey in color and completely blind, using long feelers to locate its prey, the native Lunarians.