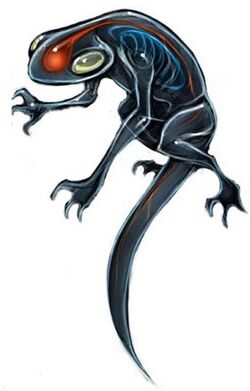 Metroid
Lumigek are a species of small, transparent, Phazon-mutated reptilianoids that bear a physical similarity to geckos. Like many other small creatures that inhabit the galaxy, Lumigek travel in swarms to give themselves a better chance at survival. Phazon mutation has afforded them the ability to absorb and radiate Phazon, which makes them even more threatening. However, even they can not survive in Orange Phazon. They live exclusively within the crater made by the impact by the Phazon asteroid.