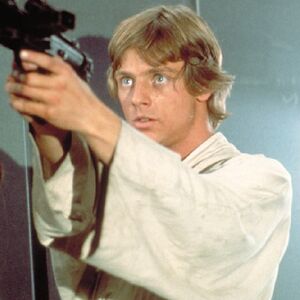 19 years before the Battle of Yavin

Mark Hamill
Luke Skywalker is the step-nephew of moisture farmers Owen and Beru Lars, raised on the desert world of Tatooine, in a galaxy far, far away. Trained by Master Obi-Wan Kenobi, and later by Master Yoda, he became a skilled Force-user and the last Jedi in existence, following the death of his mentors. His piloting skills and courage, combined with his Force-sensitivity, have also made him a valuable member of the Rebel Alliance in their fights against the oppressive Galactic Empire of Sheev Palpatine.