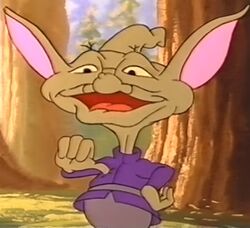 Star Wars
Luck Sprites are a mysterious race of small, green-colored sapients that inhabit the forest moon of Endor. They have the ability to affect other creatures' luck.

Luck Sprites are small creatures, shorter than a juvenile Ewok. They have green skin, proportionally short legs with long feet, four-fingered hands, large ears, and a single antenna on their heads which glows when they're using their powers.