"As Oscar says, they'll be extinct soon, and - and they don't even care. All they do, all they can do, is sit before their caves and think. Probably they think godlike thoughts, but they can't summon even a mouse-like will. That's what a vegetable intelligence is; that's what it has to be!"
―Patricia Hammond, "The Lotus Eaters". 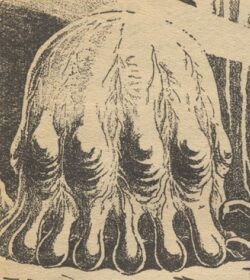 Stanley G. Weinbaum
Lotophagus Veneris is a species of intelligent vegetation native to the dark side of Venus. They were discovered in the late 21st century by biologist Patricia Hammond and her husband Hamilton.

Lotophagi are sessile creatures which live in burrows scattered over the icy caves of the dark side of Venus. As their environment has an average temperature of minus 30° Fahrenheit (~ -34.4 °C), a dead Lotophagus will putrefy quickly if kept in room temperature. Conversely, when the atmosphere gets too cold they retreat into their burrows to keep themselves warm.

Despite referring to the Lotophagi as "plants", Patricia has also described them as similar to fungi or lichens. Indeed, they don't seem to have much in common with Earth plants, given that they are warm-blooded, capable of some movement (retreating into their burrows) and possess a complex circulatory system. Living in perpetual darkness, they possess no leaves or chlorophyll. Curiously, however, they do possess eyes, and even have multiple sets of semi-transparent lids which shield them when exposed to light. A vibrating membrane allows them to produce sounds, up to and including Human speech.

Lotophagi have an uncanny ability to learn the meaning of words just by hearing them. As such they can learn new languages easily. It appears to be a form of telepathy, although limited in that they cannot have access to words which they haven't heard yet. The idea of telepathy is supported by evidence that all Lotophagi may share a collective hive mind.

This species reproduces by means of spores which are released from ruptured pods. Once the airborne spores cling to the body of another Lotophagus, they trigger a growth development which eventually leads to fissure.

Lotophagus Veneris behaves in a way that seems completely unique among sapient races. They don't have any concern about their own well-being, and will do nothing to prevent themselves or other members of their species from being devoured by their natural predators, Triops noctivivans. It has been theorized that they evolved in an environment devoid of predators and with constant food supplies. As they reproduce asexually and think collectively, they never needed social interaction either. When the ancestors of Triops noctivivans adapted to colonize the dark side, the Lotophagi were perfectly aware that they were doomed towards extinction, but cared nothing about it.

This strange passiveness of the Lotophagi in face of eventual extinction has been linked to their vegetable nature, as, according to Patricia, "an animal has will; a plant hasn't". Although highly intelligent, the Lotophagi are purely reactive when it comes to interacting with the outside world. When the temperature is right, they come out. When it isn't, they stay hidden. While capable of keeping conversations with Humans, Lotophagi only answer questions, but never ask any. They claim they could easily master technology and find means to protect themselves if they wanted to, but, according to their own words: "there's no need". They don't feel bothered by the thought of extinction at all, and wouldn't even bother to reproduce if it wasn't an involuntary process for them.

Much like their namesakes, the "lotus eaters" from Greek myth, the Lotophagi spend their lives lost in contemplation of deep thoughts, trying to deduce the complete picture of the universe from the facts available. Since their minds are connected, their knowledge is vastly superior to any Human mind, but they never apply this knowledge, as they're incapable of action, only reaction, when it comes to the outside world.

Additionally, being exposed to the Lotophagi's spores causes Humans to be infected with the same contemplative indifference towards the world. The subject will cease to do anything but respond, and come to believe that life is meaningless and nothing is worth an effort.

Retrieved from "https://aliens.fandom.com/wiki/Lotophagus_Veneris?oldid=197003"
Community content is available under CC-BY-SA unless otherwise noted.