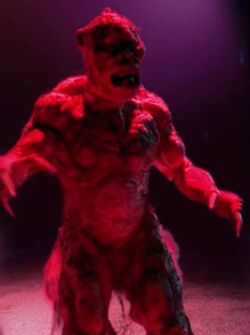 Lord Kinbote is the alleged name of a mysterious large humanoid which abducted four Humans; two of them dressed as Grey aliens, as they attempted to fabricate an alien abduction case in Klass County, Washington, 1996.

Nothing is known for certain about the entity known as Lord Kinbote: a large red-skinned humanoid who appeared in a beam of reddish light and interrupted a faux abduction that was being conducted by two Air Force agents dressed as Grey aliens. Kinbote himself apparently abducted both the Air Force agents and the unconscious teenagers that they were in the process of "abducting" before his arrival.

A witness of the event named Roky Crikenson later gave his own highly dubious account of what happened afterwards, claiming that the third alien's name was Lord Kinbote and that he approached Crikenson, telling him that he needed Crikenson's help in ensuring the survival of all earthlings.

Crikenson claimed that Lord Kinbote was not from outer space, but from inner space, residing at the core of the Earth. Crikenson's further claims that this is the realm of the reincarnated souls, his description of the souls' sex orgy, and the fact that his account (which he claimed the Men in Black ordered him not to show anyone) was written in screenplay format all cast doubts about his sanity, let alone his testimony. Fox Mulder, Dana Scully and Jose Chung all believed that Crikenson was delusional, although Mulder believed his delusion stemmed from something he actually witnessed that night.

When Mulder talked to Jack Schaffer, the Air Force pilot who was dressed as the Grey alien pilot, Schaffer also referred to the mysterious "third alien" as Lord Kinbote, suggesting that Crikenson didn't make up that name. It remains unknown whether Kinbote was a real alien, another forgery created to cast doubt upon or flat-out discredit the investigations by turning the case into something completely unbelievable, or something else.

Retrieved from "https://aliens.fandom.com/wiki/Lord_Kinbote?oldid=181200"
Community content is available under CC-BY-SA unless otherwise noted.