Alien Species
Register
Don't have an account?
Sign In
Advertisement
in: All Tomorrows Universe, Descendants of Man, Extinct Species,
and 6 more 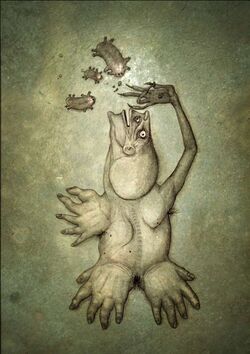 A high-gravity-world somewhere in the Milky Way

Many, including the Asymmetric People

Nemo Ramjet
The Lopsiders were a posthuman species created by the Qu from a colony of the Star People. They were relocated to a planet with thirty-six times the amount of gravity and genetically modified to survive there.

Their bodies were flat and resembled flatfish because all of their facial features, including both eyes, were moved to one side of the head, which was now the upper side. They had three paddle-like limbs for crawling and one elongated arm used for manipulation and as a sensory organ.

While one of their eyes always stared upwards, the other would scan the creature's environment to see what's in front of it.

The Lopsiders evolved into dozens of different species in their high-gravity environment, one of them becoming the Asymmetric People. One of the first steps to civilisation was the domestication of some native species of their new homeworld.