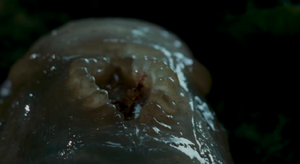 Variable to what it consumes

Slither (2006 Film)
The Long One is a mysterious parasitic alien and the only one of its kind. It travels across the universe in search of life forms to kill and feast upon and is hellbent on consuming and destroying everything on the current planet it's on until nothing is left. The Long One exists as many parasitic forms, working like a "conscious disease". The Long One arrived on Earth via a meteor that landed in the fictional town of Wheelsy in the 2006 film Slither.

It is unknown where the Long One originated from or how long it has lived in the universe. No details are given about its habitat except that it came from outer space. It came to Earth on a meteor, but because not much is known of its home-world conditions, the nature of its arrival is speculative as well. It's been mentioned that it had been around for a billion years, meaning that it has been around, feasting on and destroying other worlds for some time.

The Long One exists in many physical forms. Though it isn't explicitly mentioned, it can be categorized into four entities or forms, (at least, for the purposes of this discussion). These are the Needle, Primary Host, Womb and Slugs (see notes below).

The Needle is the original form of the Long One. It is called Needle, because of its resemblance to a needle, albeit much thicker and seemingly hairier. It is encased in a small gelatinous sac, which opens up when the Long One is ready to shoot out and implant itself into a host. Once implanted into a host, the Needle merges with the host and turns into the Primary Host.

The Primary Host is a changing and growing form of the Long One. It starts out looking like its original host and is continually deformed to eventually resemble a giant squid over time. It is characterized by its whip-like tentacles emerging from various points of the Primary Host's body after full mutation. When the Needle implanted itself into Grant, his physical appearance could be compared to a cross between a squid and John Carpenter's rendition of the Thing.

The Womb is another form of the Long One, which is created by the Primary Host by implanting part of itself into another host. The Womb continually feeds and thus continually grows, still resembling its host, but becomes much more massive to the point of becoming a giant sphere of flesh. Once the Womb gets to a certain size and cannot grow anymore, the hosts body rips itself apart, releasing hundreds of Slugs.

The Slugs are small, red, worm-like forms similar the Long One which move by slithering or swimming. Like the Needle, the Slugs also implant themselves into hosts, although in their case, they are swallowed; changes are mostly behavioral and not physical. A physical change that is noticeable is the bleeding from the mouth, due to the forced entry of the Slug.

The Long One's physiology is not explained, though it is evident it has a complicated life cycle and physiology, capable of space travel and transforming into various physical forms. What is known is that it is a parasitic creature, capable of controlling hundreds, (possibly even more) hosts at any given time through its various forms. The Long One can control any life form, (not just humans), but may prefer humans due to their extensive cognitive and physical abilities.

The Needle is encased in a small gelatinous sac, probably as a defense mechanism for when it lands on a new planet like Earth, whose atmosphere is foreign to it. It can also be thought as a protective shield for the small fragile Needle form of the Long One. The sac opens up when a viable host comes nearby and the Needle shoots into its abdomen and travels to the brain. In the case of Grant, the Needle shoots itself into Grant's breastbone, slithers up his brain stem and settles in the hind-brain region, initially taking control of his cerebellum and eventually (as suggested, though not mentioned) moves up to control his cerebrum. The cerebrum and cerebellum function together to control all voluntary muscles as well as aid in sensory, language and memory processing. This control becomes evident when it is observed that the Long One not only control Grant's movements, but also shares in his memories and communication skills. It is also evident in how the Long One, across all its forms, functions on a "hive mind" mentality, which is why the Womb, the Slugs and all infected hosts function as a singular unit.

The Primary Host therefore acts sort of like a home base for the Long One, allowing it movement and speech, something that its original form as a Needle couldn't do. The Primary Host will start to have rashes, swelling, and an insatiable hunger for any raw meat it can get, eventually growing tentacles and evolving into a grotesque monster. Its tentacles are strong and flexible enough to kill animals from a distance, which is important for the Long One as it feeds on raw meat. It is also strong enough to vertically split a human being. The Primary Hosts moves by slithering, despite its larger size; however it stops moving at some point when it feels it is no longer threatened or when it is too large to physically move due to merging with more hosts. The Primary Host does not lose total control however. This is evident in how the Long One still is longing for Starla, Grant's wife, which is indicative that Grant is still present in the decision-making process. It becomes more evident in how Grant is able to suppress the Long One from killing Starla.

The Long One also needs a Womb to give birth to Slugs, which in turn makes more Hosts. The Primary Host impregnates another host by injecting its material through two tentacles emerging from its body. In Grant's case, two tentacles extending from a hole in his abdomen act as the vehicle to transport the Slug eggs into Brenda's stomach. The impregnation requires two tentacles to penetrate the host's body, as one is not enough. The Womb can still think and speak with some semblance of rationality, but is distracted by an overwhelming desire to eat (signifying a control of the hosts hypothalamus), busying its time consuming raw meat. The eating allows for the birth of hundreds, maybe thousands of Slugs, which burst out ripping the Womb apart.[noted above]

The Slugs can be thought of as the worker-bee or extensions of the Long One, capable of infecting more hosts at once. Unlike the Needle, the Slug's control on a host is limited only to movement and communication. No cognitive or independent ability is ever manifested. Because of the hive mind nature of the Long One, Slug-controlled hosts have the same memories and exhibit the physical mannerisms as the Primary Host. The Slug-Hosts can also spit an acid-like substance that causes a burning sensation and increased blood pressure of the affected area. The Slug-Hosts live for two purposes: To gather food for the new Wombs and to synthesize or merge with the Primary Host, allowing the Long One to become bigger over time and thus consume more.

It is possible to remove the Slug before it manages to completely enter the host however. This has only happened once with Kylie, who managed to fight the slug that was trying to enter her, long enough for it to weaken and allow her to pull it out of her mouth and kills it with a hair strengheiner This encounter also transferred some of the Hive's memory of other planets that have been previously consumed to Kylie allowing her knowledge of what was happening in the town.

The Long Ones goal of total destruction and consumption cannot be achieved through one physical form, especially not in the form of a small Needle; this means that as terrifying as the Primary Host is, it cannot kill every single individual without threat of annihilation. In order to control more people, it needs to spread parts of itself in the form of Slugs, which can infect and control other hosts and eventually result in global assimilation.

The Long One's complicated life cycle can be summarized in these six events:

The Long One is killed by the efforts of Police Chief Bill Pardy and Starla Grant. In the Long One's attempt to impregnate Bill (making a Womb out of him), Bill manages to stick one tentacle into a propane tank, sending the higher pressure gas into the body of the Primary Host. Starla then shoots the Primary Host, igniting it and causing it to explode.

Upon the death of the Long One, every infected life form is killed, including the Primary Host, the Wombs, the Slugs and the Slug-controlled hosts, due to the extensive damage of the parasite. However, the movie never specifies whether or not the control of the other planets that have been previously consumed has been disconnected following the events, or even if there is more than one Hive-Mind in general.

Retrieved from "https://aliens.fandom.com/wiki/Long_One?oldid=202620"
Community content is available under CC-BY-SA unless otherwise noted.