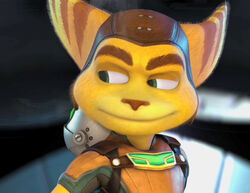 Ratchet and Clank
The Lombax are a bipedal, humanoid species that originated in the planet Fastoon in the Polaris Galaxy. They are known throughout the galaxy for their mechanical and technological ingenuity, given how they have an innate affinity towards gadgetry and machinery.

Lombaxes are cat-like and completely covered in either yellow or white velvety fur, with orange or maroon coloured stripes running down parts of their body. They had large ears and triangular feet with three claws on each foot, as well as large hands with five fingers. All known Lombaxes wore gloves, so it was possible that generally most Lombaxes wore gloves.

According to a news broadcast in A Crack in Time, female Lombaxes did not have tails, as evident with Angela Cross.

The Lombaxes originated from the Polaris Galaxy where, years ago, they fought a Great War against the Cragmite empire. The Lombaxes were hailed as the saviors of Polaris after defeating the Cragmites once the War had reached a stalemate. However one Cragmite, Percival Tachyon, survived. The Lombaxes discovered him as an egg in Lombax Trillium mines and raised him as one of their own on Fastoon.

However, once he found out that he was a Cragmite, Tachyon raised an army against the Lombaxes in the rage that his true origins were hidden from him. Taken by surprise, the Lombaxes attempted to flee to another dimension using a device called the Dimensionator. While many were able to avoid being destroyed by Tachyon, others were killed in the conflict trying to escape Kaden stayed to protect the Dimensionator and sent his infant son Ratchet to the Solana Galaxy to keep him safe. Tachyon eventually killed Kaden after tracking him down an unspecified time later.

As a result of Tacyhon's onslaught, only Ratchet, Angela Cross and Alister Azimuth were the last known surviving Lombaxes in their dimension. The dead Lombaxes were eventually avenged by Ratchet upon defeated Tachyon and preventing the Cragmites from returning to their native dimension. During the ordeal, Ratchet got a glimpse of the dimension the surviving Lomaxes were inhabiting through the powers of the Dimensionator.

Lombaxes were very capable fighters with natural skills. The Lombax Praetorian Guard are the elite warriors of the Lombax people. General Alister Azimuth is the only member who has been featured in the canon, with the rank of 4-Bolt Magistrate. Ratchet's father Kaden may have also been in the Guard due to his staying behind, but this is never confirmed nor denied. The weapons they use are unknown, but it can be inferred that wrenches are used for close-quarters combat. The Guard can presumably be recognized by their Trillium Armor.

In addition to their combat skills, Lombaxes were known throughout the Polaris Galaxy for their advanced technological knowledge, and rarely used unmodified equipment. There were several Lombax groups devoted to developing such technology, including the Center for Advanced Lombax Research. The Lombaxes created various hi-tech gadgets, weapons and armor through the use of their facilities.

Lombax on the Ratchet & Clank Wiki

Retrieved from "https://aliens.fandom.com/wiki/Lombax?oldid=187060"
Community content is available under CC-BY-SA unless otherwise noted.