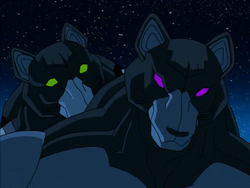 Ben 10
Loboans are a race of werewolf-like aliens from Anur Transyl's lush, forest-covered moon Luna Lobo in the Anur System.[1]

Loboans are werewolf-like aliens with bushy tails, mouths that can open outwards into four hinges, and three or four sharp claws on each hand, one of which serves as the thumb while the others act like fingers. Both the interior of their mouths and their eyes come in different colors such as purple, green, red, and pale orange.

Whenever a Loboan's muzzle splits open, their tongues retract and stow themselves away.[2] However, certain Loboans' tongues instead stay in place and split in half.

Although they traditionally have grey fur, Loboans can come in other colors. For example, Crüjo has brown fur. Some Loboans also have long flowing manes.

Loboans have voracious appetites and will eat anything, including their own kind.[3]

Loboans can emit an ultrasonic howl by splitting their quadra-hinged muzzles to become a concussive blast[3] capable of causing considerable damage. Technically speaking, these sonic howls are powerful enough to exceed the screaming capabilities of Sonorosians.[4]

A Loboan's sonic howls can be used to reflect incoming projectiles and propel themselves upward like a rocket booster. They can also damage Petrosapiens if are projected at the correct frequency.[5]

Loboans have enhanced senses of smelling and hearing, giving them great tracking and detection abilities.

Loboans possess enhanced agility and reflexes, being able to dodge attacks from enemies.

Loboans possess a degree of enhanced durability, enough to withstand being blasted back into a tree.

Loboans possess enhanced strength, being able to pin down an Aerophibian and carry Humans while propelling themselves with their sonic howls.

Loboans can jump into the tallest trees, such as those found on Luna Lobo, to catch prey.[3]

Loboans have prehensile feet and tails, the latter of which can be used to put out small fires.

Like the other races in the Anur System, Loboans are immune to the effects of Corrodium.

Loboans have varied levels of intelligence, as those found on Luna Lobo are smart enough to operate machinery and understand instructions.

Like Earth canines, Loboans are sensitive to loud noises, such as the ringing of giant bells and even their own sonic howls.[5]

Foul odors can hurt a Loboan's sense of smell.

There is a limit to a Loboan's durability, as they can be incapacitated after being lifted and thrown by a species with as much strength as a Tetramand.

Loboans cannot use their sonic howls if their muzzles are forced shut by something, such as a Thep Khufan's bandages.

Loboans can experience fear in the presence of Toepick's Species.[5]

Although there are good and evil Loboans, their social norms are not the same as Humans'.[5] They are one of several races under the command of the Ectonurites.

There are allegedly wild packs of Loboan on Luna Lobo, who mostly act like savage beasts with little sense of reasoning. While these feral beasts mostly hunt in packs, it is a lone wolf that often proves to be the most savage Loboan of all.[1]

The Loboans seen on Anur Transyl display higher self-control and seem to be able to integrate themselves into civilized life. However, they do not appear to be friendly towards beings from outside the Anur System and view them as monsters. 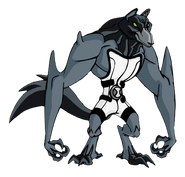 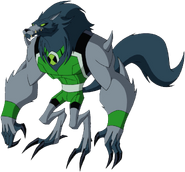 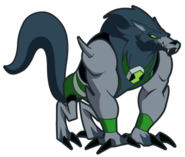 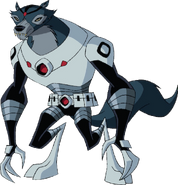 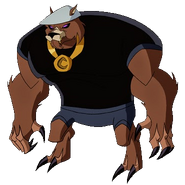 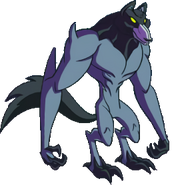