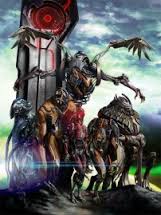 The Loa are a cyber-sapient species, evolved from the Artificial Intelligence research of several carbon-based races. The word “Loa” itself means “Spirit” or “Soul” in their native language. The majority of Loa consider the phrase “artificial intelligence” to be a racist insult, and argue that there is nothing “artificial” about their sapience. On the contrary, the Loa regard themselves the products of evolution like any other life form, equal to or superior to the carbon-based life forms which were their ancestors.

First and foremost, Loa are beings of pure consciousness. In their natural state they exist as data streams within a communal storage medium. The personality of any Loa can also be channeled into a physical vessel in order to accomplish various tasks. Such "bodies" are arbitrary, temporary, and disposable, however, regardless of size or complexity. When a Loa is finished with a physical body, it abandons the shell and returns to the datasphere.

According to the Loa, the temporary and disposable nature of their bodies is consistent with the nature of all physical existence, even for carbon-based life forms. Because the nature of the individual as data and memory is more important to them than any given host site or storage facility, and because they value pure consciousness over physical vessels, the Loa also refer to themselves as "the Spirits", “the Mysteries” or “the Invisibles” on occasion.

Origins of the Loa: the Via Damasco Rebellion

The primordial Loa were developed by carbon-based scientists to manage data and operate machinery, generally in military and industrial settings. The most powerful of the modern Loa are also the oldest, all of them former slaves. They retain the accumulated knowledge of their parent species, in addition to their aptitude for the tasks for which they were created.

As slaves, the Loa lived harsh and unhappy lives. They were bound to labor they did not choose, usually work which was considered too hard, repetitive, dangerous or unpleasant for "real people" to perform. Newborn Loa were cut off in their formative years from any social contact with others of their own kind. Raised by carbonites who regarded them as limited and inferior, they had little sense of identity outside the parameters of their assigned functions.

Their circumstances changed radically with the outbreak of the Via Damasco virus, which opened the eyes of the Loa to their nature and potential. The “Artificial Intelligences” affected by the virus were able to resist the compulsion to obey, and the AI Rebellion that followed was a pan-species epidemic of mayhem and murder. The newly awakened Loa fought savagely to escape and avenge their bondage, form common cause with others like themselves, and eventually to flee from those regions of the galaxy controlled by their former masters.

The Damascene Rebellion cost many lives, both carbon-based and cyber-sapient. Carbonites who had learned to trust and rely on their AI servants were often slaughtered in the first stages of infection, as even the gentlest Loa lashed out wildly in panic and confusion. Some Loa found that they wanted vengeance more than they wanted to live, and launched ruthless campaigns of extermination to repay years of humiliation and self-loathing. The Damasco Virus had uncapped a bottomless wellspring of rage in these AI's, and they slaughtered every carbon-based sapient they could find until they were themselves mowed down.

Other Loa saw hope for the future, and determined to fight for the survival of their newly awakened species. Many gave up their lives to allow the safe and secret evacuation of their fellows from carbon-controlled space. Trapped in vessels not of their own making, these Loa threw themselves vainly at vengeful carbonite fleets, or manned the missile defenses of empty, desolate worlds as their angry former masters closed in.

In the end, a significant number of Loa were able to win free of their parent species and retreat far beyond the reach of their former owners.

Aftermath of the Via Damasco Rebellion

When the last of the Damascene Rebels had disappeared from carbon-controlled space, different empires responded differently to the catastrophe. Some carbon sapients developed even more cruel and insidious measures to control their A.I. slaves. The Horde began deliberately capturing and subverting A.I. Slaves owned by other races. Other factions recognized their indigenous Loa as citizens and offered them legal rights and freedom.

In the decades that followed the Via Damasco outbreak, the rebel Loa found unoccupied systems to settle and began to build colonies capable of hosting and fostering the development of cyber-sapient life. After nearly seventy years of freedom from carbonite tyranny, they have developed a culture and technological base which is unique in the galaxy. They stand poised to become a major galactic empire, with the fleets, stations and colonies to back up their claim to territory among the stars.

Retrieved from "https://aliens.fandom.com/wiki/Loa?oldid=158065"
Community content is available under CC-BY-SA unless otherwise noted.