Alien Species
Register
Don't have an account?
Sign In
Advertisement
in: Bipedal Species, Descendants of Man, All Tomorrows Universe,
and 8 more 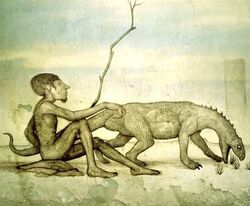 Evolved into the Saurosapients' pets

Nemo Ramjet
The Lizard Herders were one of the posthuman species created by the Qu from a colony of the Star People.

While the Lizard Herders retained their humanoid body plans, the Qu made slight changes in their brains, making it impossible for heuristic learning to be evolved ever again. Because there were no predators on their planet, the evolution of intelligence also was not necessary to survive.

Despite their low intelligence, they instinctively began herding a species of herbivorous reptile evolved from pet-lizards brought there by their Star People ancestors.

The climate of their homeworld formed the perfect environment for the lizards to evolve and radiate into different species. One of those species, the Saurosapients, would eventually gain sapience and breed domesticated versions of the Lizard Herders' descendants.