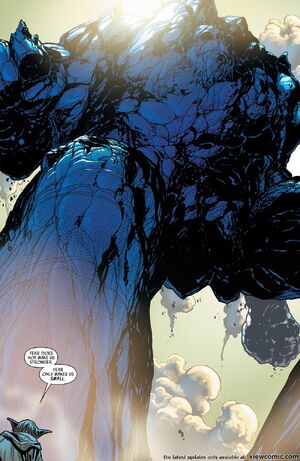 Star Wars
The Living Mountains were a race of colossal giants that inhabited the forgotten world of Vagadarr in the new rebooted Star Wars Universe.

The Living Mountains were titanic sized beings made of sapphire blue crystal. They were strong in the Living Force, being literally wrought from it, making it difficult for other Force sensitives to detect it and manipulate it without careful study and training.

The Living Mountains were emphatic beings being influenced by the emotions of those around them. Without the emphatic thoughts of other races they would simply die out.

One could not truly kill a Living Giant, they are immortal with a Force wielder, it was possible to ignite a few scraps of life in the creature to return it to life.

Young Living Mountains were about the size of adolescent children.

The Living Mountains lived on the planet Vagadarr where they ruled as the dominate species. They protected their world from the greatest threats, until the smallest of threats humans became their undoing. Humans with greed and a lust for the power of the giants, drove the giants to their knees in fear. They crawled beneath the crust of the planet to sleep, becoming mountains, however the humans still coveted their powers, and sought to mine and butcher the sleeping giants.

By the time of the age nearing the end of the Old Republic they were all thought to be extinct. Only one giant remained, its body fought over by two warring factions who had forgotten the existence of the titans.

When Yoda visited Vagadarr he was instrumental in bringing peace to the warring tribes and helped resurrect the Living Mountains.

During the age of the Rebellion, majority of the human population abandoned the planet in favor of exploring the stars. The Living Mountains dwindled in number until only their progeny remaining who were hunted by an insane stonepower wielder. Luke Skywalker would follow Yoda's journey to this world, and ignite life on Vagadarr just as the Jedi Master did.

Retrieved from "https://aliens.fandom.com/wiki/Living_Mountain?oldid=184745"
Community content is available under CC-BY-SA unless otherwise noted.