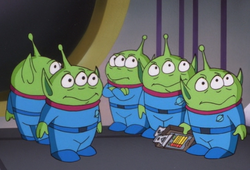 Buzz Lightyear of Star Command
Toy Story
The Little Green Men, or simply LGMs, are a sapient alien species whose minds are all interlinked, allowing them to share thoughts and feelings with each other. They are notably employed by Star Command as technicians and scientists.

Like their name suggests, the Little Green Men are small, green-colored humanoids with three eyes and a short antenna on the top of their heads.

The Little Green Men are skilled workers. Commander Zeb Nebula credits them as the ones who keep Star Command in shape. Their high intelligence and technical skills are partly explained by the mindlink: the aliens' ability to think and feel as one. The mindlink is possible due to an object called the Unimind, a mystical orb located on the Little Green Men's homeworld that links all of their kind.

The Little Green Men often (though not always) speak in unison. They are also the creators of XR, Buzz Lightyear's robot partner.

When Evil Emperor Zurg stole the Unimind, the Little Green Men lost part of their intellectual capacities, becoming unable to properly fix a damaged XR. Because of this, XR ended up acquiring a much more Human-like personality ("so many character flaws!"). After Zurg was defeated by Buzz Lightyear, the Unimind was retrieved and the aliens' mindlink was restored.