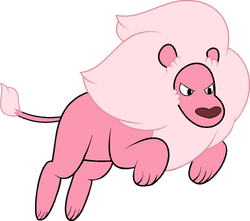 Little is known about Lion except that he died sometime in the past and was revived by Rose Quartz, giving him magical abilities. Hundreds of years later, Lion eventually found and befriended Steven.

Lion mostly resembles a regular lion, but has pink skin and a light pink mane and tail due to being resurrected by Rose Quartz. He has rounded ears, black eyes that glow white when he uses his magical abilities, and a brownish-pink nose.

Lion has several magical abilities due to his resurrection by Rose Quartz, including a powerful roar that can generate portals, a pocket dimension within his mane that can store a large amount of objects, and the ability to walk on water.

Retrieved from "https://aliens.fandom.com/wiki/Lion_(Steven_Universe)?oldid=188768"
Community content is available under CC-BY-SA unless otherwise noted.