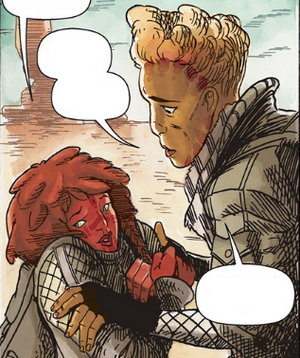 Afar
This is an unnamed species of humanoids originally native to the planet Tarmtok, and which have later settled on Maltura.

This species is humanoid, similar to Humans. They possess a wide variety of skin colors, (red, yellow, blue, green) which is also decorated with a pattern of spots. Their hands possess six fingers. Unlike Human males, baldness is unheard of.

The species appears to be somewhat technologically advanced enough to possess space-travel to reach Maltura. They were originally highly sophisticated but since the loss of their homeworld have taken a more agrarian approach to their new world so as to avoid repeating their ancestors' mistakes. In addition they possess highly advanced cybernetics called bioniks.

Universal Spirit Walkers were common among their people before they migrated to Maltura.

Originally from the world of Tarmtok, they migrated to Maltura centuries ago due to their world's ecological damaged caused by the previous generations. Learning from their mistakes, their scientists, craftspeople, engineers, etc. worked together on Maltura to build a sustainable non-invasive home.

Using their skill they created the Borses to assist them in farming the land, minimizing their reliance on technology. Life on Maltura was difficult with reports of nutrient loss during the early colony days. The colonists sent out expeditions to seek out new pockets of land for farming.

During one such trip to a promising colony site they discovered several delicious fruits. However the fruits were noted by the scientists to be highly addictive to their species' physiology. Despite the warnings of the scientists, the affected colonists insisted that the fruits were safe and wanted to remain in the area, and coerced the expedition to stay. Those few that refused to eat the fruits attempted to leave in order to create an antidote.

Lindu, an alien girl, was the daughter of the two scientists that wished to leave. Unfortunately the afflicted demanded they stay, killing them when they believed they were trying to steal the fruit they were taking back to create an antidote.

Botema, a newly awakened Universal Spirit Traveler, accidentally possessed Lindu and stumbled upon her and her comrades attempting to flee the affected colonists. Kimdar, Lindu's boyfriend, was injured during the attack, and Botema was driven out of her body.

Later Botema returned and with the help of Lindu's friend Talo managed to save the colonists by using Ruus to incapacitated the technology of their captors. From Talo it was learned that Lindu was a nascent Spirit Walker, which was significant since she was the first one in centuries, thus explaining why Botema could easily possess her. The two parted and Botema released control to allow Talo to explain to the others of the events that transpired.

Retrieved from "https://aliens.fandom.com/wiki/Lindu%27s_Species?oldid=148488"
Community content is available under CC-BY-SA unless otherwise noted.