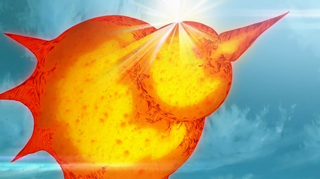 Life Fibers are multi-cellular microorganism. They may be long and thin, but they are very durable. As a parasitic organism, they naturally feed off the bio-energy in the cells of the nervous and circulatory system of a human host. However, unlike most parasites, instead of feeding off the host from the inside because the strain would kill the host, they feed from the outside.

Shortly after the Original Life Fiber appeared on Earth, Life Fibers began living as parasitic life forms, gaining sustenance from the biological life energy of other organisms. However, since the host could not withstand the strain of having them in their bodies, the Fibers began covering the host instead. As such, they targeted the ancestors of today's humans, which were the species with the most well developed brains at the time, and started accelerating their evolutionary process. With time, Life Fibers entered a dormant state, but left mankind with the evolutionary instinct to cover themselves. Twenty years before the events of the main story, Ragyō found the Original Life Fiber, causing the Life Fibers to awaken from their stasis, seeking to feed on human life.

COVERS (カバーズ Kabāzu?) are Life Fiber entities that are responsible for the dissemination of Life Fibers throughout the world. The name "Revocs" is an anagram of their name. COVERS can roughly be separated into two groups: cloth-form COVERS and human-form COVERS. Cloth-form COVERS appear as white business suits with a red bowtie that need to stay in contact with the Original Life Fiber in order to stay active - usually by one or two Life Fibers that connect them to their source. When a cloth-form COVER absorbs a human being as an energy source, it becomes a human-form COVER that can operate autonomously. In this form, the COVERS gain a more substantial, muscular appearance, with their "bowtie" enlarging into eye-like growths and a necktie-shaped hole appearing in their chests that bears the emaciated face of its absorbee. According to Ragyō, the intent of COVERS is to "bind the heavens, the earth and mankind, covering all."

Retrieved from "https://aliens.fandom.com/wiki/Life_Fibers?oldid=198315"
Community content is available under CC-BY-SA unless otherwise noted.