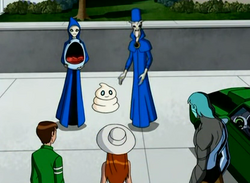 Lewodans are a seemingly peaceful species from the sandy planet Lewoda.

Lewodans are white humanoid aliens who have light blue eyes with no pupils. They are ice cream-shaped when they are young, and become humanoid when they are older. They do not have legs.[1]

Lewodans are considered a delicacy by Jarrett, king of the Pantophage.

Lewodans can fly using electromagnetism, which can glitch Omnitrix-type technology if they are not skilled.

Lewodans are shown to hold their own in hand-to-hand combat with Appoplexians.

Lewodans have extremely flexible bodies and can teleport.

Lewodans are capable of regeneration, being able to grow themselves back after taking damage.[1]

Despite appearing to be peaceful, Max Tennyson has stated that they are actually quiet but very aggressive. They also seem to be hostile against the Appoplexians, with whom they recently formed a truce. 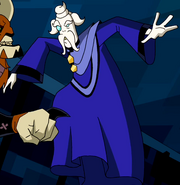 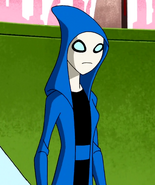 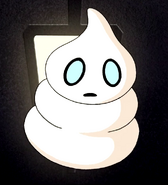 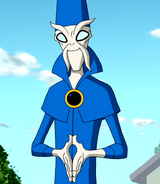 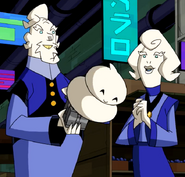 Retrieved from "https://aliens.fandom.com/wiki/Lewodan?oldid=188806"
Community content is available under CC-BY-SA unless otherwise noted.