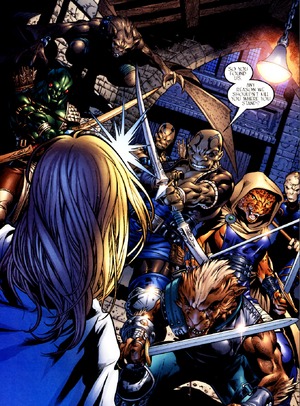 The Lesser Races were created by the humans of Avalon to serve a variety of functions. Thus they were given various forms to suit the needs of their tasks. Many Lesser Races resemble part-beast men, other reptilian humanoids.

Centuries ago on the world Avalon, the Lesser Races were created by the two reigning powers at the time: the Heron Dynasty and the Raven Dynasty. After a catastrophic war, a truce was signed by the two dynasties and all sciences regarding to genetic engineering was destroyed.

The Lesser Races would spread across the two lands. In the east the Lesser races found themselves enslaved by the Raven Dynasty. Whereas in the West where the Heron Dynasty ruled, the Lesser Races never suffered such indignity, but were treated still treated as second class citizens.

One faction of the Lesser Races known as the Swimmers created their own civilization, far more advanced than the surface, hidden and sequestered from the world beneath the seas.

Princess Ashleigh of the Raven Dynasty promoted equality amongst the Lesser Races in her kingdom, creating the Underground. She and her followers assisted members of the persecuted race in escaping to freedom. However her efforts were for naught as when her older brother, Prince Bron, came into power after murdering his father. Prince Bron well aware of her actions proceeded to destroy the Underground and revoke her status as a princess of the Raven Dynasty.

While the Underground was destroyed Ashleigh lover Prince Ethan of the Heron Dynasty continued the dream by creating Sanctuary Island, a new nation for the Lesser Races.

Retrieved from "https://aliens.fandom.com/wiki/Lesser_Race?oldid=173001"
Community content is available under CC-BY-SA unless otherwise noted.