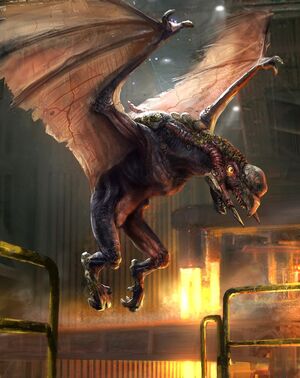 Lerks are a avian-like subspecies of Kharaa in the Natural Selection Universe. It becomes a playable Kharaa during a match after paying thirty resource cost points. Its name was given to it by Commander Ty Summish.

A Lerk holds a vague resemblance to a Earth Pterosaur, or bat. It has a pair of large bat-like wings, with two-toed clawed hands capable of gripping walls and ceilings as it awaits for prey. Its mouth ends in a jugged toothed beak, with a set of tubular organs aimed forward to shoot spike projectiles at enemies from afar. While a fast flyer, its wings make it very slow when walking on the ground.

Retrieved from "https://aliens.fandom.com/wiki/Lerk?oldid=181365"
Community content is available under CC-BY-SA unless otherwise noted.