Ben 10
The Lepidopterrans are an extraterrestrial species of insectoids from the swamp planet Lepidopterra.

Two radically different phenotypes of this species have been observed. The first kind is comprised of insectoids with four insect-like legs and two arms with three-clawed hands. They have four pedunculated eyes that are quite small at a young age, but grow larger and gain pupils over time. Their very fragile wings have vascular vein-like patterns and stinger tails that are functionally ultra sensitive receptors, making them behave like antennae.[1] Infants of this breed have large eyes with pupils and smaller wings.

The second kind of Lepidopterrans have slender humanoid bodies with cyan skin and light blue shoulders, armpits, and ankles. They have cyan compound eyes and several light blue stripes on their bodies. They also have two orange wings and two dark cyan antennae. Females of this breed are thinner than males and have spikes on their forearms.

The quadrupedal Lepidopterrans are preyed on by Buglizards, who are able to neutralize a Lepidopterran's goo by generating a yellow fog.

Lepidopterrans possess two insectoid wings that allow for extremely acrobatic flying, allowing them to pull off amazing maneuvers of precision and grace. They are extremely agile, able to avoid most attacks while attacking opponents.

Lepidopterrans are stronger than Humans, being able carrying heavy loads while maintaining steady flight. For bipedal Lepidopterrans, their strength extends to their prehensile feet, being able to carry half a train while flying.

Lepidopterrans can excrete high pressured streams of liquid from the pollen ducts located inside of their eyestalks, shoulders, and/or mouths. These liquids can function as either a flammable toxin or an immobilizing adhesive capable of blinding a Petrosapien. Of course, this depends on the Lepidopterran in question instinctively choosing what type of slime it can be.[2]

Lepidopterrans possess enhanced dexterity, being able to operate an Earth cell phone with their three-fingered hands.

Lepidopterrans are commonly accompanied by a natural odor-like stench; this come from the oils they secrete to keep their exoskeletonal joints moving.[3]

Lepidopterrans can use their slime to suppress fires because of their fire extinguisher-like properties.

Lepidopterrans can release a cloud of methane gas.[4]

A quadrupedal Lepidopterran's tail is extremely sharp with a stinger-like tip that can tear and rend through steel near-effortlessly.

Quadrupedal Lepidoterrans have 360 degree vision. As such, they can move two eyes at the back of their heads and keep the other two eyes towards the front.

Bipedal Lepidopterrans have bioluminescent bodies, meaning that they can glow in the dark.

While designed mainly for grappling, the hard spikes on a female bipedal Lepidopterran's forearms make valuable weapons in battle.

Infant Lepidopterrans are able to emit a powerful herbicide via flatulence.

Undead Lepidopterrans can absorb goo through their eyestalks, functionally working in the opposite of ordinary Lepidopterrans.[5]

Due to the alterations Kevin Levin has made to the Antitrix, Skunkmoth is more powerful than ordinary Lepidopterrans. He is also more durable thanks to his body armor, and his slime has acidic properties.

Omni-Enhanced Lepidopterrans can project electric sticky goo-like orbs from their mouths that behave like heatseeking missiles.

Although their exoskeleton body is fairly strong, Lepidopterran wings are very fragile.

Water is especially a problem for Lepidopterrans, as it can render them incapable of flight if too much gets on their wings. Additionally, they are unable to swim well due to the small surface area of their legs.

Lepidopterran goo can be broken apart by a species with as much strength as a Chimera Sui Generis. It can also be neutralized by a Buglizard's fog.

Like most Earth insects, Lepidopterrans are extremely vulnerable to any kind of chemical poison or gas. In the case of bipedal Lepidopterrans, this extends to a particular gas that they can create.

Lepidopterrans can be lifted and tossed around by a species with as much strength as a Tetramand.

Lepidopterrans are vulnerable against fire and electricity, such as a Terroranchula's webbing.

Omni-Enhanced Lepidopterrans are unable to either shoot goo or spray stink gas due to their powers being altered.

Lepidopterrans spend most of their lives harvesting the giant plants on Lepidopterra.[6]

Residing in a complex of giant hives that are each ruled by its own queen, Lepidopterrans are the predominant species on Lepidopterra.

Life on Lepidopterra is seasonal, and every species plays a part in keeping the ecosystem healthy, making sure that the flora continues to produce fruit so that they can live together in harmony as they have for countless eons.

A group of Lepidopterran explorers once landed on Khoros, where they were mistaken for invaders and fought off by the Tetramands.

The Lepidopterrans were unexpectedly visited by a group of Ekoplektoids, due to their navigation system being interfered with by their smell, and mistook them for invaders. The Ekoplektoids explained to them that they needed space to expand their ever-multiplying population, so the Lepidopterrans allowed them to stay. 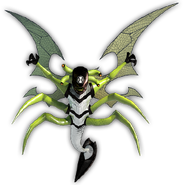 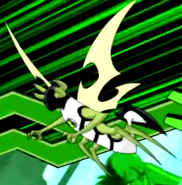 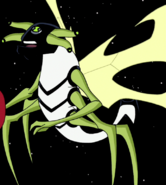 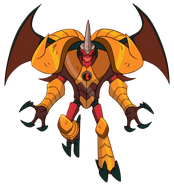 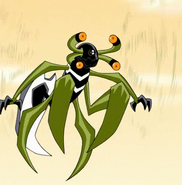 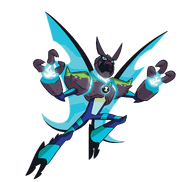 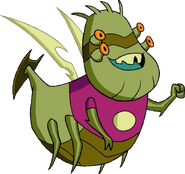 Skurd creating a pair of wings out of Lepidopterran DNA