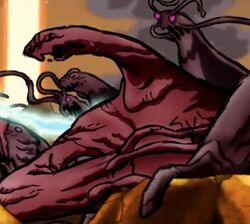 Ben 10
Lenopans, mostly called Sludgepuppies or simply Sludges, are a sapient species of amorphous shapeshifters from an unknown planet.

Lenopans are capable of taking on humanoid shapes and features, while retaining a mud-like appearance.

Female Lenopans have two mobile whiskers on their cheeks and two antennae above their eyes, while males lack both, and usually have smaller eyes than females.

Lenopans can stretch and morph their bodies in any way shape or form to the point of changing their color and texture to mimic flesh or fabric. With enough training, their shapeshifting can extend towards inanimate objects.[1]

Lenopans can detach and reattach parts of their body at will. For example, if they have been blown up, their pieces will instinctively come together again and reconstitute them.

Lenopans can alter their bodies, or at least parts of them, into different objects such as weapons. Using their sludge, they can look like another shape made of purple sludge and can still move while in liquid form.

Lenopans can alter the density of their sludge, making them durable enough to withstand a Petrosapien's crystal shard projectiles.

Lenopans can also alter the properties of their sludge, making them gelatinous akin to a large mass of muscle. Similarly, they can make themselves adhesive, allowing them to trap other beings inside of them fire masses of their slime as projectiles.

By shapeshifting into non-existent or imaginary aliens ranging from Slapstrike to Unitaur, Lenopans can gain a variety of unique abilities.

Lenopans can travel underground infinitely while in their natural forms.

Due to their blob-like nature, Lenopans are vulnerable to being solidified if exposed to strong temperatures, such as fire generated by a Pyronite.

Lenopans are weak against electricity, such as that generated by stun batons.

Lenopans can only shapeshift as large as their mass allows.[1]

Though now at peace with humanity, Lenopans have historically tried to cause trouble on Earth and had thus been in opposition with the Plumbers.

Similar to Human culture, the taboo against cousins dating extends to cousins unrelated by blood.[2]

The Plumbers of Earth and the Lenopans were involved in a decades-long feud, before it was ended by the marriage of Plumber Joel Tennyson and Lenopan Camille Mann. However, Camille's family objected to her marrying a Human and conspired with both their bodyguard and Camille's ex-boyfriend to ruin the wedding by any means necessary.

During the rehearsal dinner, Camille's ex-boyfriend disrupted the reception to forestall suspicion upon the parents, but he was quickly dealt with by Ben Tennyson as Diamondhead. During the wedding, Mr. Mann, Mrs. Mann, and their bodyguard went on a rampage in an attempt to destroy the wedding. The Manns were dried and solidified into a brittle mass by Ben as Heatblast while the bodyguard was blown up by Max Tennyson.

With Gordon and Betty Jean Tennyson accepting Camille into their family, Joel and Camille finally got married, thereby putting end to the decades-long Plumber/Lenopan feud once and for all. In the wedding's aftermath, the evil Lenopans were arrested by the Plumbers.[3] Roughly six years later, Camille's cousin Lucy became the first Lenopan Plumber. 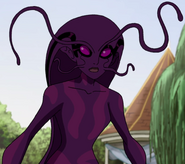