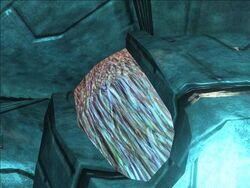 Halo
The Lekgolo are a species of colonial eel- or worm-like organisms which naturally join together to form purpose-specific assemblages, the most noteworthy of which are the Mgalekgolo, also known as the Covenant Hunters. Lacking vocal chords thanks to their unique physiology, they instead vibrate their bodies to make low rumbling speech that has been described as being "more felt than heard", indicating that it vibrates in infrasound. Their blood is orange-red and smells like burnt plastic.

Each Lekgolo is an individual eel-like organism that grows up to about 1.4 meters long, which possesses its own central neural system. It has been speculated that their neural system can operate a small distance outside of their own bodies, which explains how configurations such as the Mgalekgolo are considered a collective being. Interestingly, it seems that once a Lekgolo joins a configuration, if they are forcefully removed from the rest of the stock, the removed members will shrivel up and die; it appears that their central nervous systems become entirely linked, and a bullet through one eel will affect the rest of the colony. The collection of Lekgolo in a configuration are in fact unintelligent at their most basic level, but become capable of forming complex thoughts and ideas and emerge as conscious individuals when they combine into larger masses, which communicate to each other through chemical and electrical means.

Only one Lekgolo configuration is known - the Mgalekgolo; however, it seems that the great Covenant Scarabs are also a configuration of these worm-like entities. This is still partially unproven, however, although if it is true (as they are known to fill what appear to be the inner workings of a Scarab), then other self-operating Covenant equipment such as the Tyrant anti-air cannons are likely also Lekgolo colonies, as well. Oddly, while the Mgalekgolo is one of the most common configurations witnessed during the entire length of the Human-Covenant War, it is one of the rarest and in fact, one of the smallest, within Lekgolo society. At least in terms of the Mgalekgolo, the neural net that they developed enables them to become incredibly strong and sensitive to all things within a 1,000 foot line pointing out from non-combat form, and a half-sphere that extends 500 feet in combat form.

When a single colony of Mgalekgolo (and likely all other colony types as well) become too large, it will divide in half to create two independent colonies. These colonies will forever more share an extremely close and yet mysterious bond, referred to only as being "bond brothers" or "mates". Mgalekgolo who have divided in such a way are easily recognized by their spiked appendages that rise from their shoulders, which is their way of indicating their bonding to another colony. These two colonies are dropped into battle together by the Covenant to battle better, and if one of the two colonies is killed, the other enters a frenzied state, like a mother losing its child though vastly more dangerous.

Because Lekgolo configurations are a mass of perhaps a thousand entities instead of a solitary being, they cannot be infected by the Flood, as their unique physiology disallows the Flood Infection Forms to access a central nervous system to control them to any capacity. Even so, their flesh is likely capable to be used simply for its biomass.

Strangely for a Covenant race, the Lekgolo do not actually believe in the Great Journey, which is the main belief and mainstay of the entire Covenant armada. Instead, they only associate with the conglomerate of races to take advantage of their advanced technologies - mainly space travel, but also for weapons as well as other "creature comforts". Outside of fighting for their allies, the Lekgolo do not take part in any Covenant religious action whatsoever. This separation is also partially the cause of the fact that it was the Sangheili alone whom tamed them; because of this, the Hunter-class (and perhaps other classes) would only follow a Sangheili's command up until the Covenant Civil War where many chose to side with the Covenant, perhaps to keep their technology "bonuses".

Speculation indicates that some Mgalekgolo meditate in their spare time or before a battle. This may infer that they possess their own religious beliefs behind the Prophet's backs. The idea of a complete lack of religious belief in the Lekgolo seems unlikely due to the almost ritualistic nature in which they recite war poems and the significance behind their colonial names.

Lekgolo will almost never associate or even communicate with other Covenant client races, with the exception of the Sangheili as they appreciate and acknowledge their similar warrior ideals. They are typically dismissive, scornful and arrogant to the "lesser" Covenant races such as the Unggoy and Kig-Yar, and are utterly contemptuous of their foes. Many Covenant members are mystified and confused by the Lekgolo and indeed their way of life is almost as alien to them as the Flood themselves.

A Sangheili Fleet Master once noted that the species were known to tear an opponent apart with their "bare hands" whilst in a blood frenzy and then pause to recite war poetry. It is also noted that the Mgalekgolo seem to meditate in their spare time or before battles.

Each Mgalekgolo has three names: a personal name, bond name, and a line name. Their personal names are given upon their birth. The line name represents their genetic heritage, being the name of the most successful Mgalekgolo of his ancestors; in effect, if the individual reaches a certain level of status, his offspring will inherit his personal name as their line name. The bond name - sometimes called their middle name - is taken between bonded pairs, colonies that must split into two due to excessive size. Of all known Mgalekgolo names, it appears that the given name has 3 syllables while the bond and line names will only have 2 syllables. How longer given names translate into shorter line names is not known. Two examples of Mgalekgolo names are Igido Nosa Hurru and Ogada Nosa Fasu.

The Lekgolo evolved on their homeworld of Te and fed by burrowing through the soil of their planet. Eventually, the Covenant collective landed on their world in search of Forerunner artifacts. When the Covenant only found the remains of a space station that had once contained many artifacts but was now barren, they realized that this lack of precious relics was due in whole to the worms, which had since broken down and eaten the devices. Unfortunately for the Lekgolo, the Prophets viewed this act (despite its unintelligent design) as an act of heresy, and declared war on the Lekgolo in what would later become known as the Taming of the Hunters.

However, the Lekgolo's unique physiology proved a tremendous and unexpected advantage in combat, not only hampering but even slowing the Covenant's advance. The war spirit in the Covenant continued to boil over as they were further infuriated by the Lekgolo's destruction of further Forerunner artifacts during their routine feedings. Becoming desperate, the Prophets inducted a Sangheili into the suicidal role of Arbiter, and with his martyred help the Covenant were eventually victorious through their superior starship technology and efforts of the Elites; even so, the Lekgolo proved mostly victorious in ground combat campaigns. In the end, the Covenant were forced to rely on orbital bombardment, a strategy against which the Lekgolo had little to no defense. Faced with inevitable extinction, the worm-eels were forced to agree to absorption into the ranks of the Covenant to save themselves. Even this process was hampered, however, due to communicatory difficulties, but eventually the terms for their induction were met. In their agreement in joining the Covenant, the Lekgolo worms, which fed upon specific minerals, were consigned to investigate the Forerunner Dreadnought that resided inside of High Charity in an attempt to help uncover its inner-workings. Their price for this trade was access to space-travel technologies and exploration of the Covenant space lanes.

Groups of these creatures were given thick armor plates and Fuel Rod Cannons to help them serve their new masters better as the Mgalekgolo. They loyally served the Covenant for many years, even having command over lower-ranking Sangheili during the Battle of Onyx. However, with the onset of the Covenant Civil War, the species was divided into those who supported the Covenant Loyalist and those who supported the Covenant Separatists. During this time, most Hunter pairs chose to side with the Sangheili and the Separatists, likely through their deep respect for the Elites since the time of the Taming of the Hunters, or because the acknowledged their similar warrior thoughts. It was also the Lekgolo worms who isolated Medicant Bias from the rest of the Forerunner Dreadnought when it tried (unsuccessfully) to flee High Charity by short circuiting the ship's systems.

Upon the destruction of the Ark, the fate of the Lekgolo is unknown, although it is assumed that Te was not affected by the war.