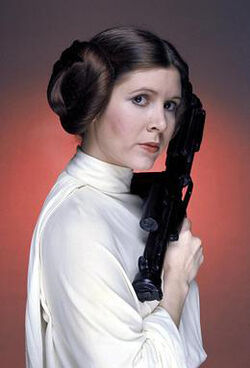 19 years before the Battle of Yavin

Carrie Fisher
Princess Leia Organa of Alderaan is the adopted daughter of Senator Bail and Queen Breha Organa of the planet Alderaan, in a galaxy far, far away. Like her parents, she joined the Rebel Alliance and fought against the oppressive Galactic Empire of Sheev Palpatine. Although not trained, she has demonstrated a latent ability to harness the power of the Force.

Retrieved from "https://aliens.fandom.com/wiki/Leia_Organa?oldid=167882"
Community content is available under CC-BY-SA unless otherwise noted.