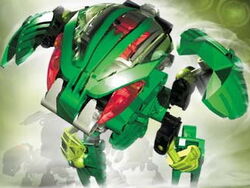 none, are controlled by Krana that speak telepathically

Lehvak are Bohrok associated with the element of acid. They are have a green/light-green coloration, but carried red Krana and had red eyes. They held acid shields that were used to channel their elemental power to melt any substance.

The Lehvak were most known for their role in the destruction of Le-Koro, where they placed almost the entire population, including Turaga Matau, and Toa Lewa under control of the Krana.

Lehvak tended to operate in small groups and disappeared before they could be captured.

Retrieved from "https://aliens.fandom.com/wiki/Lehvak?oldid=166383"
Community content is available under CC-BY-SA unless otherwise noted.