"Gentlemen, what you're about to see will forever revolutionize science and warfare."
―Dr. Woodman introducing his creation 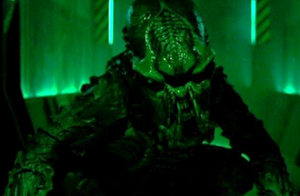 Alien Lockdown
"Legion" is the nickname given to an artificially-created species of genetic chimeras, brought to life by a team of Human scientists on Earth by combining DNA from several different life forms, including an alien sample from a meteorite which had fallen from the skies circa 10,000 years BC.

Legion is an armored quadrupedal predator which can move around with great speed and agility and seems to be extremely voracious, hunting down everything on its path. It has been described as having an incredibly fast metabolism, which probably accounts for its appetite.

Its armored skin is bulletproof and harder than steel, and the vulnerable tissue underneath it is capable of encysting into a thick protective shell when exposed to extreme temperatures (both heat and cold).

After the original specimen was created, it seems to have reproduced, giving rise to numerous offspring which appear more insectoid than its adult form, perhaps representing a kind of larval stage.

Retrieved from "https://aliens.fandom.com/wiki/Legion_(Alien_Lockdown)?oldid=144323"
Community content is available under CC-BY-SA unless otherwise noted.