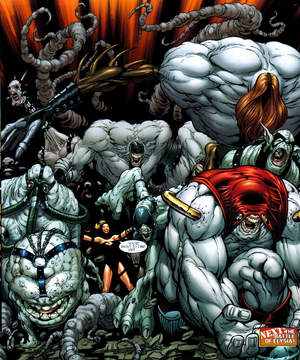 CrossGen Universe
The Lawbringers are a race of amoral sadistic gods created by Charon, the god of the Negation Universe in CrossGen Comics.

The Lawbringers are misshapen creations of Charon, born from his negative emotions. Majority of them are grey or black skin creatures. Each are capable of turning worlds apart. Their powers include energy projection, telepathy, teleportation, shapeshifting, telekinesis etc. One Lawbringer alone has enough power to destroy an entire planet.

Ten thousand years ago when Charon and Appolyon and millions of humans found themselves in the Negation Universe. Mad by the Transition, and confused by the new environment, Charon believed that he had broke the universe, and set it upon himself to bring back 'order'. To help him, in his mission, he created the Lawbringers to subjugate worlds into compliance. However these entities while weaker than their father, were created from negative emotions cast out by Charon. They caused collateral damage throughout the universe, in their father's mission, forcing Charon to only use them as a last resort.

One Lawbringer, named BLQK, however disagreed with his father's vision. He created the Negatation Resistance and encouraged rebellion against the state. BLQK was eventually captured, but rather than kill him, he instead was impriosned.

In preparation for a full scale invasion of the Bright Universe, some Lawbringers were deployed to access the defenses and several worlds. One known as Miranda Cross, was somehow stranded on the world of Arcadia and stripped of most of her powers.

Before CrossGen went backrupt, the story would have planned out as the Lawbringers wiping all but a handful of the First. The Lawbringers themselves would have suffered casualties with all save BLQK being destroyed in the final confrontation against the Sigil-Bearers.

The Lawbringers are a sadistic race, that live on suffering and discord. They are known for their massive destructive personalities, though a few are capable of restraint and even subtly. All their names are four letters spelling out a dark emotion.

Retrieved from "https://aliens.fandom.com/wiki/Lawbringer?oldid=175382"
Community content is available under CC-BY-SA unless otherwise noted.